Remembering the Journey Along the Oregon Trail 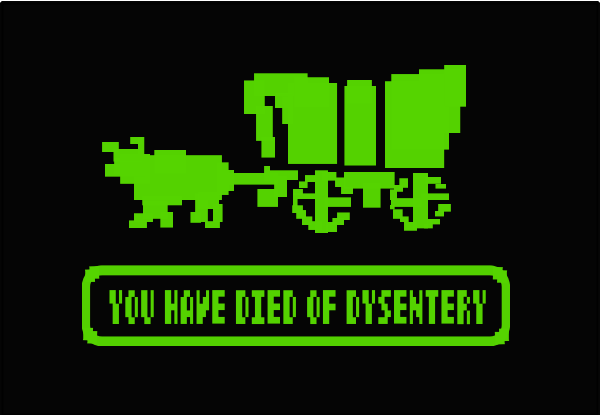 Remembering the Journey Along the Oregon Trail

It was the message you feared because you knew it was inevitable. Each turn, you anticipated that it would show up on screen, and then there it was…

Mary has died of dysentery.

The Oregon Trail, one of the most successful and enduring pieces of educational software, recently turned 50. I know I am not the only child of the 1980s in the U.S. who first learned about the bacterial infection caused by poor sanitation when a member of his traveling party heading West was felled by the disease.

Writing recently at Slate, Robert Whitaker tells the story of The Oregon Trail, the brainstorm of a Minneapolis junior high school student teacher named Don Rawsitch. Rawsitch was inspired by his professors at Carleton College to explore innovative methods of teaching and first invented a board game version, which was eventually ported to a computer format by Rawsitch’s roommates, who were dabbling in programming.

Reading Whitaker’s history of the game’s development took me back to a summer school classroom in Northbrook, Illinois circa 1980 where we were learning rudimentary computer programming using the BASIC language. We also had copies of The Oregon Trail, and we would play it over and over trying our hardest to get the whole family unit safely to the coast.

As I recall, one of the most important choices was the names for the members of your traveling party. Some chose their friends. Others included the teachers so when someone died of yellow fever, onlookers would get a chuckle. My preferred companions were my favorite Chicago Cubs of the time. Thank goodness in real life that Dave Kingman and Iván De Jesús did not break a leg or drown when the wagon capsized on a river crossing.

In terms of the history learned from playing The Oregon Trail, I don’t remember much beyond the high incidence of disease that would turn your insides out and that shooting a buffalo on a hunting expedition would feed the whole family for a week. A Vox analysis indicates that most game elements were rooted in reality, but often either simplified or exaggerated.

We often treated dying from dysentery like a joke, but it sounds like it isn’t something you’d wish on your worst enemy.

More compelling was the critical thinking challenge of managing one’s scarce resources in order to maximize the odds of making it safely. Everyone had their own strategies. Some opted to load up with food and move slowly to reduce wear and tear on the wagon. Others thought it best to bring lots of ammo and kill their food along the way.

(If you want to try your hand at the game there’s a version circa 1990 online.)

Mostly, what the anniversary of The Oregon Trail recalls is a different era of education technology software, when the interests of the students led the way rather than concerns over managing and monitoring students. Now, students and schools are looked on as marketplaces for tech entrepreneur opportunity, an orientation that has left the landscape riddled with expensive failures, such as Knewton, which promised to be a “mind-reading robot tutor in the sky,” but was, uh…not that. Or consider Amplify, which set out to produce “personalized learning” technology along what is known as the “engineering model,” which goes like this:

After years of development, Larry Beger, the founder of Amplify, disappointed by the results said, “Here’s the problem: The map doesn’t exist, the measurement is impossible, and we have, collectively, built only 5% of the library.”

Amplify was looking at students as uncomplicated entities that can be reduced to a set of manipulatable variables, rather than as human beings whose motivations and abilities are shaped by a different constellation of factors each day. As Berger also said, “Just because the algorithms want a kid to learn the next thing doesn’t mean that a real kid actually wants to learn that thing.”

Don Rawsitch was a teacher who started with what would be engaging to students and went from there.

Don Rawsitch also didn’t make any money on his creation, even though it’s sold millions of copies. Rawsitch considered himself an educator, not an entrepreneur, so he gave away the source code in an article in an educational journal.

Now, if you’ll excuse me, I have to go and decide how many oxen I’ll need to start my journey.